During the second observation run (O2) of the Advanced Laser Interferometer Gravitational-Wave Observatory (LIGO), gravitational waves were detected on June 8, 2017 at 02:01:16 UTC, in the evening of June 7, 2017 in North America. This signal, known as GW170608, comes from the spiraling together and collision of two black holes and was detected by both the LIGO detectors in Livingston, Louisiana and Hanford, Washington. This gravitational wave signal comes from the merger of two black holes 340 megaparsecs, or 1.1 billion light years away. This is believed to be the lightest binary black hole system of all the black hole binary merger signals announced so far. 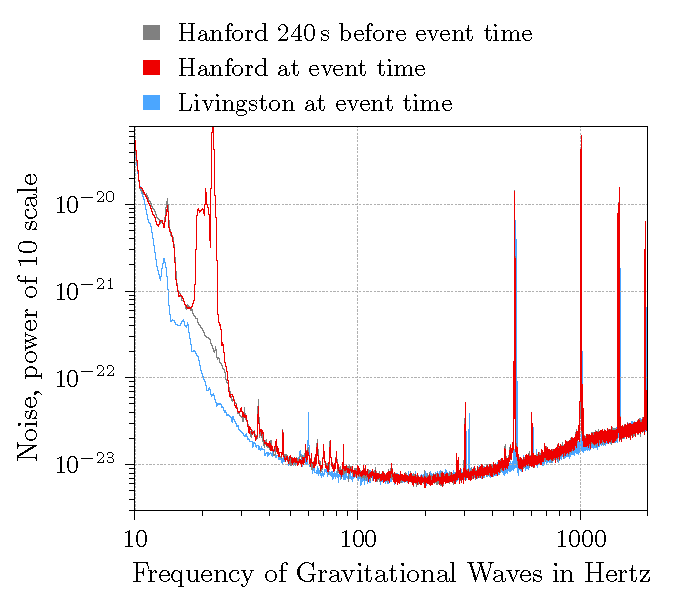 Binary systems of two black holes have only been observed so far through gravitational waves. However, other black holes which are in binary systems, where the secondary companion is a star, are also known. These systems emit X-rays which can be detected by space telescopes such as Chandra and contain black holes with masses between about 5 and 20 times that of the Sun. GW170608 is the second black hole binary detected by LIGO, along with GW151226, where the black hole masses are similar to those of black holes identified by X-ray observations.

The LIGO detectors are instruments that can measure very precisely the variations in length of two 2.5-mile-long arms, caused by the passage of gravitational waves. A laser is split into two beams and sent down each arm, where it reflects back and forth off mirrors before recombining with the beam from the other arm. The peaks in laser light intensity of one beam and the troughs of the other combine so that very little light is detected, and as the arm lengths change the peaks and troughs don't line up perfectly and light can be observed. This allows for very precise measurement of the relative difference in length of the two arms.

On June 8, 2017 the LIGO Livingston detector was working well with high sensitivity. The LIGO Hanford detector had a lower sensitivity than Livingston and it was undergoing a routine process to measure the laser beam's position on the mirrors. It was determined that this process greatly reduced the sensitivity to gravitational waves for frequencies below about 30 Hertz, but left the sensitivity above this frequency in its normal state. The sensitivity of both LIGO detectors is shown in Figure 1, with the excess noise at Hanford clearly visible below 30 Hertz. In June 2017, the Virgo detector was in an early stage of preparations, before joining the O2 run on August 1, 2017. At the time of GW170608 its sensitivity was not yet sufficient to contribute to the detection. Around 9pm local time a characteristic chirp signal, with an oscillation increasing in both frequency and amplitude over time, was automatically detected in the LIGO Livingston data. This is visible in Figure 2, which shows how much energy is in the data coming from the two LIGO detectors as a function of both time and frequency. The LIGO Hanford data was not being checked automatically because of the routine measurement process, but it was found that the same signal was in the Hanford data above 30 Hertz. A chirp signal is characteristic of two large objects spiraling around each other and eventually colliding. 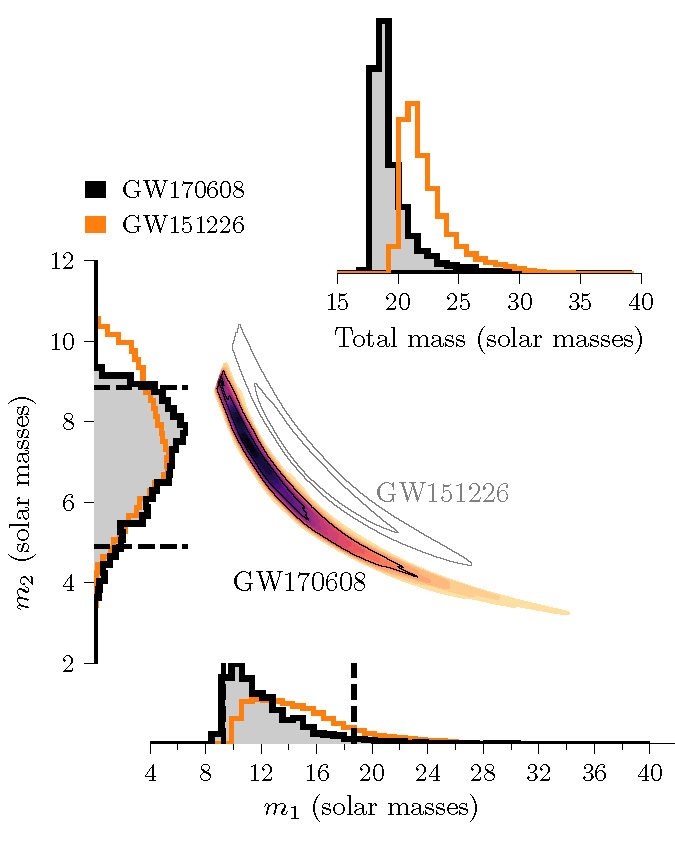 From the rate at which the frequency increased, the masses of these two objects were determined to be about 12 and 7 times the mass of the sun. Because of these masses both objects are believed to be black holes, and have comparable masses to both the black holes in the gravitational wave signal GW151226 and to black holes in X-ray binaries. Figure 3 shows the likely range of the two masses as well as the likely range of masses for GW151226. This shows that it is likely that GW170608 has the lowest total mass of any black hole binary detected by LIGO. The smaller of these two black holes, with a mass of 7 times the mass of the sun, is one of the lightest black holes detected by gravitational waves.

The individual black hole masses of GW170608 give scientists hints about the environment where the black holes were formed. When massive stars reach the end of their lives, they lose large amounts of their mass due to stellar winds - flows of gas driven by the pressure of the star's own radiation. The more 'heavy' elements like carbon and nitrogen that a star contains, the more mass it will lose before collapsing to form a black hole. So, the stars which produced GW170608's black holes could have contained relatively large amounts of these elements, compared to the stellar progenitors of more massive black holes such as those observed in the GW150914 merger.

The difference in arrival times (about 7 milliseconds) of the signal between Hanford and Livingston allowed the location on the sky of GW170608 to be estimated within several hundred square degrees. An alert with this information was sent to other astronomers who aimed their telescopes at this location searching for possible electromagnetic (light) signals.

The overall amplitude of the signal allows the distance to the black holes to be estimated as 340 megaparsecs, or 1.1 billion light years. This gravitational wave signal was compared with numerical simulations based on Einstein's equations of gravity. No differences, up to the accuracy allowed based on the noise in the detectors, were found. Thus this signal gives no reason to doubt that Einstein's General Theory of Relativity correctly describes gravity in our universe.

Read more of our papers about black holes and gravitational waves: